[This interview originally appeared on the now-defunct Fractal Matter website in October 2006. I remember when I suggested to my editor that I could do an interview with David Lloyd, she said, ‘Who’s he?…’] 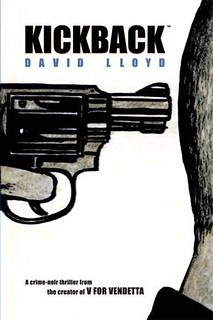 Pádraig Ó Méalóid: Dark Horse have just published Kickback, which I believe is your first outing as both writer and artist. Can you tell us about the book?

David Lloyd: Well, I’ve written before – short stories, one-off issues (Kalgar in White Dwarf, 5 episodes, 1978; Man In the Fog in Tales of Terror #3,1985, with Bob Curran; Journal of a Space Traveller in Alien Encounters #5, Feb 1986; Vixen – early story from 1977 – in Negative Burn #6, 1993; Lasting Impression in Dark Horse Presents #86, with Siobhan Dodds; Aliens: Glass Corridor, Dark Horse, 1998; The Big Snooze in Gangland, DC, 1998, reprinted in later collection; and Internet, in Vampires, Editions Carabas/ France, Dark Horse/US, 2001) – but it’s tough finding time to write your own stuff if you’re constructing someone else’s dreams, and enjoying it, and paying the bills doing it.

Kickback was written in a quiet summer month in 1999, when I’d finished a job and the phone wasn’t ringing with another job to take its place. It was finished in first draft form and secreted away when the phone rang again with an interesting offer.

I eventually got time to interest someone in the project in 2003 – but I chose France to offer it to instead of the market I usually work for, the US, because when I wrote it, that was the market I thought would embrace it more immediately. In 1999 crime comics were not big sellers in the US apart from staples like Sin City, whereas the French market loved crime books and wasn’t clogged up with superhero stuff.

I’d worked with a great guy in France in the years preceding 2003 – Jerome Martineau from Editions Carabas – who liked my work and trusted me completely as a creator. So he ended up taking the book, and published it in France in two albums, with a compilation edition in March of this year to coincide with the release of the V for Vendetta movie.

Because I own all rights in the work, I eventually sold it to Spain and sold it to Dark Horse for publication in the US. I’ve since sold it to Germany and Italy.

The story is about a corrupt policeman in a corrupt police force and how and why he gets to change the direction of his life. But on a deeper level it’s about corruptibility in us all. We are all corruptible, I’m sorry to say. It’s our biggest problem.

PÓM: Can we expect to see you doing more writing from now on, and would you like to write for other artists, or would you prefer to do your own art?

DL: Well, I had a great chat with Dave Gibbons about that, who has written much more than me and for many artists. He’s happy with good artists doing his stuff, and he’s been blessed. I’m not sure I could write for other artists unless I had to. No-one else will ever be able to see things the way I see them – and the only circumstances in which I could be happy with what someone else had done with my characters is in circumstances where I didn’t care what happened to them. So I’ll try to stay in the position of perfect interpreter as much as I can. By the way, I don’t anticipate a rush from publishers to ask me to write for other artists on the strength of Kickback – though I would be extremely flattered if that proved to be the case.

PÓM: You once told me that you’ve never worked on superhero comics. Did this make it difficult to get work, before the growth of the non-superhero comics market?

DL: No problem getting work – I worked in the UK most of my early career, and superheroes weren’t even a factor here, though one of my early jobs was drawing a crazy superhero character for TV Comic called The Kicktail Kid, who had a rocket-powered, flying skateboard and zipped about like a junior Silver Surfer. After that, I did work on a couple of superhero characters but stopped doing them as soon as I could. I developed an antipathy towards them after I realised just how immovable their domination of the market was; and also from seeing the influence they have on the general public’s perception of what comics are all about. Unfortunately, they just represent a big hurdle for anyone who wants to show the enormous potential there is in telling stories in strips. You have to jump it somehow, in order to convince people who aren’t familiar with comics that you can do something vaguely serious with the medium. And the non-superhero market hasn’t grown that much, you know.

But I must say I do like superhero characters – and I draw them now and then in special circumstances. I did a Captain America story recently – for what I thought was going to be a benefit book and turned out not to be – and I enjoyed it. I drew him in a kind of Sixties style – in the only way I could draw him that worked for me. I’m a big fan of that period of Kirby style.

And, of course, I did the covers for MadroX recently. But then, what Peter [David], Pablo [Raimondi] and Andy [Schmidt] did with that series was not superhero as we know it. It was a believable thriller. More like that would be better for the superhero genre if publishers really want to get non-comic readers into accepting it more. 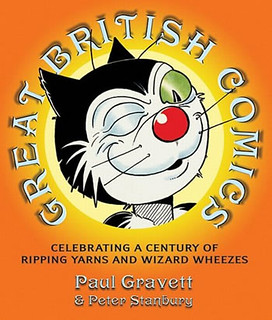 PÓM: There’s been a lot of interest in old UK comics recently, with various reprint volumes, a few books like The Ultimate Book of British Comics and Paul Gravett’s forthcoming Great British Comics. Is there any of your old work you’d like to see in print, and do you have any deep dark secrets from that time you’d like to tell us about?

DL: A lot of my old stuff is too flawed for me to want to see reprinted, but if anyone wanted to reprint a selection and wanted me to choose, I’d be happy to do the honours. Some of it still shines.

Deep, dark secrets? Don’t know what would count as such. Sorry to be a killjoy, there.

PÓM: Are you pleased with the success of the movie of V for Vendetta? Have Hollywood been knocking at your door since?

DL: Yes, I’m very pleased with the success of the movie and the response most admirers of the original seem to have to it, here, in the US, and in other countries I’ve visited since its release. Generally, that’s expressed as pleasant surprise that it’s so good, with a regret that it isn’t as good as the book. For me, that’s a good enough reason to have supported the movie from the time I saw the script and to maintain my support for it now. The creators of that film made a great film that was a creditable version of the original – and one that managed to encapsulate much of the best of the original’s value.

Hollywood has not come knocking on my door, but I’m shamelessly knocking on theirs, because Kickback would make a excellent piece of cinema; and, frankly, the way things are at this moment with the distribution and awareness of Kickback as a graphic novel, here and in the US, making a movie of it is the only way people are likely to know it exists at all. 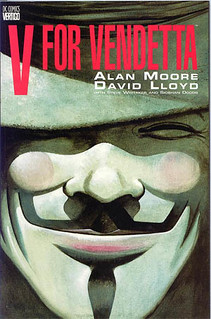 PÓM: You are always name-checked as ‘The man who drew V for Vendetta,’ a project you started about 24 years ago now. Has the success of V overshadowed your other work?

DL: The success of V has become the bedrock of my career, and if people don’t know me for much else, it’s my own fault for not maintaining a constant presence in the market with higher profile stuff than I’ve chosen to work on since that time. But I don’t do superhero stuff hardly at all, and I only work on something that interests me instead of anything that pays my bills on a regular basis. I also have neglected the importance of personal publicity – self-publicity. That’s something I will be attempting to correct from this point on, late though it may be in my business existence to start such endeavours.

PÓM: What advice would you offer to anyone wanting to make a career of comic art?

DL: That is one of those questions that cannot be effectively answered in a general fashion because it depends on the nature of the recipient of any such advice, and the quality of their innate talent. I ended up doing it because I did that better than any other form of illustration work, and kept doing it even when I was being paid to do other illustration work. That’s probably one useful gauge to use, somehow.

PÓM: Finally, if you hadn’t been a comics artist, is there anything else you think you’d like to have done?

DL: Something easy and relaxing that paid me lots of money.

PÓM: Thanks a million for doing this interview for me, David. I’ll buy you a pint next time we meet!