[This review originally appeared on 3:AM Magazine/* on Tuesday the 8th of December, 2009.] 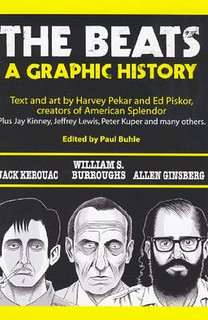 The Beats – A Graphic History is a black and white graphic novel about the Beat writers, with major sections on the three major writers – Kerouac, Burroughs, and Ginsberg – and further short entries varying from one page to three or four pages for many others. This is mostly written by Harvey Pekar and illustrated by Ed Piskor, with some entries written and drawn by others

It’s entirely possible that I’m the only person I know who has never read anything by Jack Kerouac or William S Burroughs, or Allen Ginsberg, for that matter. On the other hand, I’ve read quite a bit by Harvey Pekar’s work over the years. So, when I was offered the chance to review this book, it seemed like a good opportunity to learn something about a group of writers I knew little about from a writer I was familiar with. Surely I couldn’t but enjoy this book?

But, in the end, this wasn’t the case, for several reasons. The first reason was that, as a group of people, the Beat writers seem by-and-large to have been a particularly obnoxious bunch. In a lot of cases, being on the road seems to have just been an opportunity to have run away from their responsibilities to family and friends. Any number of them were alcoholics, drug addicts, homophobic (in at least one case whilst being homosexual themselves), racist, and appallingly misogynistic. Whatever their achievements as writers, they certainly seemed to have been hideously bad at being human beings. Burroughs in particular is remarkable for his severe drug problems, his predilection for sex with young boys, and for shooting his wife dead whilst allegedly trying to recreate a scene from the legend of William Tell. And I found I just couldn’t get beyond that: rather than finding a desire to perhaps go and read any of their work, I find I feel quite the opposite. Any likelihood there was that I might have picked up On the Road or Naked Lunch is now gone, although I might still go have a look at Ginsberg’s Howl. His worst trait seems to have been his propensity to take his clothes off in public regularly, hardly worth mentioning, in the perspective of what some of the rest got up to. 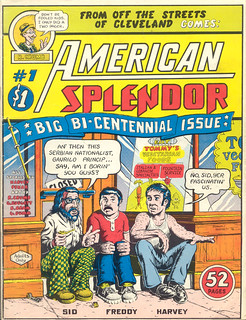 Another reason I found I never warmed to this book was that the writing and art often seemed terribly static and undynamic. Harvey Pekar is an absolute maverick superstar in the field of comics, having self-published his wonderful autobiographical comic American Splendor for many years. However, while he seems to have the ability to make even the most mundane aspects of his own life interesting in American Splendor, his writing here seems to largely consist of a list of someone’s achievements, and generally there was just a lack of any sense of movement, of any sort of narrative. He is obviously enormously knowledgeable on and enthusiastic about his subject, but for whatever reason I just never felt that his translated out of the page. A certain amount of this seems to be down to Ed Piskor’s art. In at least fifteen different places we are given a frame consisting of someone standing, often in profile, in front of shelves of books. When I started to notice this I went back and counted them, which I why I know how many there were. Quite a few frames were of people doing readings in front of other people, and there were other stock poses: hammering away at a typewriter, sitting thinking, and so on. I realise that trying to find an interesting artistic angle about writers writing is not necessarily the easiest task, but Piskor’s work in particular in this seems lifeless, whereas the other artists seems to have brought a lot more life to their pages. In fairness to Piskor, the others only generally did one piece each, whereas he had to do the majority of the book, so it’s entirely possible if the roles were reversed I’d be holding someone else’s work up for criticism instead.

There was one entry, though, which I though made the whole thing worthwhile. Harvey Pekar’s wife, Joyce Brabner, a woman with impeccable credentials in the comics field, and no mean writer herself, wrote a piece called Beatnik Chicks, which virtually acted as a counterweight for everything else in the book. In it, she says,

I found Kerouac and his cronies loathsome. Drive across the country. Drive back. Roll joints. Roll around with women. Dispose of each when done and get back in the car. Fascinate your buddies with epic tales of road trips told in run-together sentences laced with amphetamine argot, jazz jargon. Self styled odysseans whose abandoned children grew up angry, like Jan Kerouac.

That Brabner quote pretty much sums up my own understanding of what the Beats were about. Like I said at the top, the thing that I most got from the book is that this was a bunch of guys who didn’t want to take responsibility for their lives. It’s not that I didn’t like this book. I certainly found it informative, at least. And maybe I might feel differently about its subject matter if I had read their works beforehand, or if I was twenty five years old, instead of fifty. I’m certainly saddened that, having finally got around to writing a review of something by Harvey Pekar, whose autobiographical work I admire so much, it couldn’t have been a bit more positive, but there you are. I am what I am, and it is what it is. A suitably Beat sentiment to finish on, I imagine.