[This review originally appeared on the now-defunct Fractal Matter website in February 2007. I’ve touched it up a very tiny amount…] 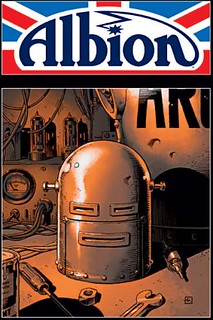 Long before it ever came out, Leah Moore and John Reppion’s Albion had a long and fascinating history behind it. All the main characters come from old UK comics, specifically those that had been published by Fleetway/IPC. From comics with names like Lion, Valiant, Smash!, and Wham! came Captain Hurricane, Robot Archie, Janus Stark, The Steel Claw, and many others. In and around the mid-Seventies, most of these comics ceased publication, and their inhabitants were seen no more. Albion sets out to explain why these characters disappeared, and what happened to them afterwards.

UK comics were always different from US comics. During their heyday, between the fifties and the seventies, they came out weekly, were generally in black and white, and were all anthology titles, featuring several different stories in each, often with only two story-pages per issue. And the characters themselves couldn’t have been more different. In the US, you had a predominance of superheroes, with the clearly identified good guys fighting the clearly identified bad guys. In UK comics, nothing was ever that simple. Many of the characters were either morally ambivalent, or just downright bad. Magical artefacts and lunatic technology abounded, and, for a nation not long out of the Second World War, and still feeling the deprivations caused by rationing, tables heaving with food were a regular feature, usually in the last panel. If American comics were aimed at adolescents, then British comics were definitely aimed at school kids, with lots of school strips, and many of the protagonists of the adventure strips were school kids, too. 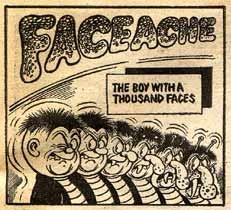 If you’re a gentleman (or, indeed, lady) of a certain age, as I certainly am, then you remember these comics, and all their idiosyncratic and twisted characters, with enormous affection. You long for another look at a page of Ken Reid’s Faceache artwork, or Leo Baxendale’s Grimly Feendish. Although this isn’t quite what you’re getting with Albion, it is, by god, very definitely the next best thing.

This is what happened: After all the great old British comics died off, in and around the mid-seventies, for reasons too numerous and complex to readily explain here, the ownership of the characters shifted around quite a bit. As yet another part of the complex and complicated history of Albion, the history of the publishers is also labyrinthine. What started with Associated Press at the beginning of the 20th century turned into IPC, Fleetway, and eventually IPC Media, with all sorts of side journeys and mergers involving Odhams, Longacre Press, and Hulton, amongst others. In the end, as happens, one company bought another, and so on and so forth, and suddenly AOL Time-Warner in America ended up owning IPC Media in Britain. 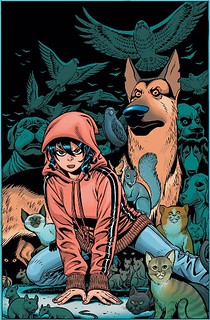 This meant that DC Comics and the archive of old IPC characters were related to one another. This fact struck several people at around the same time and, to cut a long story short, Alan Moore and Shane Oakley put forward a proposal to WildStorm, the subsidiary of DC that was dealing with the whole thing, and the idea for Albion was born. Moore was too busy to actually do the writing himself, so suggested to Wildstorm editor Scott Dunbier that he might be interested in giving the job to a pair of young writers called Leah Moore and John Reppion, who had already written one mini-series, Wild Girl, for them. And there you have it.

Straight off the bat, I’m going to tell you all that I loved Albion. I had a whole lot of fun reading it, not just because it is very well written and illustrated, but also because it helped me to remember lots of comics I read in my childhood, and had mostly forgotten since. I had an outrageously good time trying to guess who was who (and got it right a lot of the time!), and all in all I was intrigued and captivated from beginning to end. And the end, of course, is not really the end at all, but just the beginning of a whole new set of adventures for all these fabulous old folk. Or so I fervently hope.

The six issues tell a slowly unfolding tale of how the old comic characters were captured and imprisoned by the authorities, with their weapons and magical artefacts taken from them, and used covertly by the government. Our primary protagonist, Danny, a ne’er-do-well scouse lad, finds himself caught up with Penny, who grabs him at the trial of Grimly Feendish, and in fairly short order embroils him in her scheme to break into the Scottish castle containing all the prisoners, and free them. Eventfully, with the help of at least one very unlikely and unwilling ally, they set out to do just that. In the meantime, tempers are short and things are beginning to fall apart in the prison itself. Where will it all end? I strongly recommend you read the book and find out for yourself.

Albion teems with huge amounts of old comic characters, all drawn with obvious love and respect by Shane Oakley, who seems to have, in the last issue, tried to put every UK comics character that ever existed, along with all their toys and odd creatures, into a number of double-page spreads. If you’re interested in old UK comics, or even if you’re not, you should get a lot out of Albion. I certainly did, and it has afforded me hours of pleasure, just trying to tease out the identity of that last robot or gun or creature luring in the corner of a panel. I’ve ended up buying lots of old annuals and comics, just to see some of those old strips again. You can even get a taste of these old strips in the Albion collection, as there are several pages of reprints of old stories in the back. 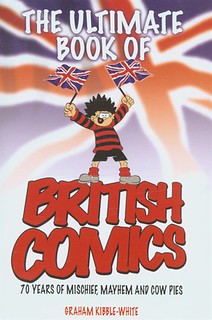 If you decide you want to know more about old UK comics, then you’re in luck. There seems to be a growing awareness of what we’ve lost, and quite a number of books have come out over the last few years about British comics in particular. You could try Paul Gravett and Peter Stanbury’s Great British Comics, an excellent, if perhaps over-full history of the medium since the beginning of the 20th century. Another excellent sourcebook is The Ultimate Book of British Comics by Graham Kibble-White. There have been some nice reprints from Titan of stories featuring The Steel Claw and The Spider, too. However, bearing in mind that these are skinny hardback volumes at rather elevated prices, I think I’ll quote Garth Ennis from his introduction to Battler Britton #1 (one of the other titles to come out of the IPC treasure trove) where he says,

Americans tend to look after their history a little better than the British, and the comics industry is no exception. Archive editions, masterworks, hardbacks and more, lovingly reproducing thousands of pages of classic American comics, are widely available and kept in print for future generations to enjoy. But what about us Brits?

That’s what I’d really like to see, you know. Lots of big cheap reprint volumes of Faceache, and Galaxus, and, oh, just lots and lots of them. Of all of them.